Keoladeo National Park, previously known as Bharatpur Bird Sanctuary is the main attraction of the city of Bharatpur. This bird sanctuary is one of the finest bird parks in the whole world and is home to around 366 magnificent species of birds. No just birds, the huge area of the reservoir provides for diverse habitats that are populated by various other animals like snakes, turtles, fishes, and many wild animals and plant species. 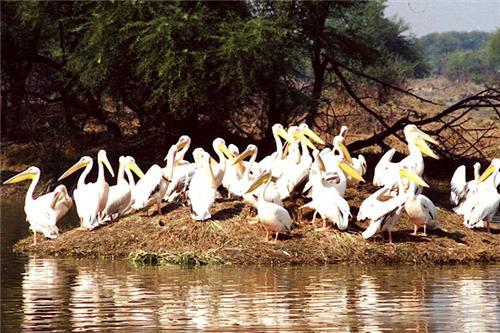 Because of its richness and the rare migrations that this park witnesses, it was declared a protected area in the year 1971 and it is also named in the list of World Heritage Sites.

Early History of the Sanctuary

The history of Keoladeo National Park is quite interesting. Not many know, that this national park is actually a man made one. The lake at the centre of the sanctuary was actually created while mud was extracted for creating a dam to protect Bharatpur from the annual floods. This lake created the right habitat for all the flora and fauna that now exists here and is now the personal heaven of migratory birds.

The sanctuary is almost 250 years old and is named after the Keoladeo or Lord Shiva temple situated inside it. The grounds of the sanctuary were used as hunting grounds for the Maharajas of Bharatpur and ducks were the center of all the hunting activities.

Keoladeo National Park is a host to different micro habitats. It has trees, grasslands, wetlands, dykes, water areas with plants and several other things. After every few 100 meters, one can find a different mini world altogether. These micro habitats have different trees, animals and atmosphere altogether.

In 1985, the Bharatpur Bird Sanctuary was declared a World Heritage Site, depending on the various parameters set by the reviewing authorities. For the starters, the site should be of immense value and should qualify on 10 listed criteria, mentioned in the guidelines of the World Heritage Convention. The point that qualifies Keoladeo National Park as a World Heritage site is that it is home to some of the rare and endangered species of birds and animals. This park is of huge international value as it is the winter retreat for many migratory birds and also a nesting ground for some rare species like Siberian Crane.

Geography of the Sanctuary

Keoladeo National Park is also known as Keolade Ghana National Park. The word ‘Ghana’ means dense and is what exactly defines this national park. Spread in an area of 292 kms, this national park is at a distance of  2 kms from Bharatpur. This park is a combination of wetlands that are swamped with different species of animals and birds.

This national park has wetlands, grasslands and even woodlands made up of Kadam trees. The greenery of this park actually surprises the eyes given the fact that the surrounding areas are almost desert like. Scientists have estimated that the park has around 379 species of flowering plants.

The wetland area of the park is a part of Indo Gangetic plains and is flooded during the rainy season. Rest of the year, the park remains dry and only 102 km goes under the wetlands. The man made dykes divide the wetlands into 10 parts and the water levels are controlled manually. The whole of the park sees natural water management too, which is very good for its eco system. The management here has also arranged tube wells that provide for water in the times of drought as well as extreme summers. 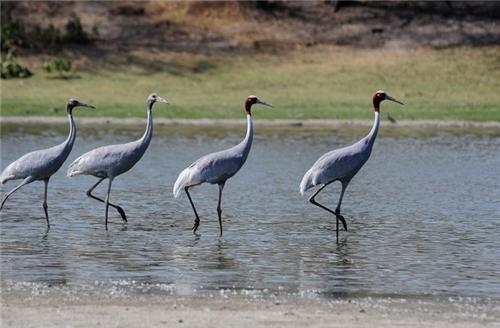 The climate of Keoladeo National park is in sync with the surrounding areas. The temperature here goes from 5 degree in the winter to 47.8 degrees in the summers. This place gets an average rainfall of 662 mm every year. It gets rain on almost 36 days of the year.

Researchers and local observers have noticed a gradual shrink in the habitat of e national park. The less rainfalls and super hot summers have reduced the size of the wetlands substantially. Researchers worry that this may eventually endanger the already endangered species that live here.

The Keoladeo National park is the only green piece of land in the otherwise dry surroundings. This place is basically a dry deciduous forest. Most if the park is covered with small to medium sized tree and shrubs. The artificially managed land is covered with trees like Kadam, Jamun and Babul.
The woodland area of the park is dominated by the babul trees with some Ber and Kandi trees for company. The fauna in this land survives mostly for the artificial water management, otherwise the park lies in the middle of an arid region, with a very low water table.

The fauna of the national park includes several species of birds and animals. The bird species alone stands at around 370, including a large number of rare and common species. Some of the beautiful animal residents are Langur, Chital, Neelgai, Hog Deer, Wild Boar, Jungle Cat and many more.

Tourism at the Bharatpur National Park

Keoladeo National Park is a very famous tourist spot in the region. It's proximity with the NCR (National Capital Region) also attracts a lot of foreign and local tourists. It is great hotspot for bird watchers and photographers from the India as well as abroad. Statistics state that more than 100,000 people visit the park every year.

The park is open from sunrise to sunset and the entry fees here is Rs. 50 for Indian tourists and Rs. 200 for foreigners. Personal vehicles are permitted only till a certain point in the park, after that one can choose between, walking or hiring a rickshaw. You can also enjoy boating at the lake.

The peak seasons are from August to November, so it is advisable to make your bookings early.

How To Reach Bharatpur

By Road
Bharatpur is well connected and can be reached from anywhere in the country. Buses ply from, Delhi, Mathura, Jaipur and Alwar.