Situated in the heart of the small city of Bharatpur, Ganga Temple is one of the most popular temples in the state of Rajasthan. Known for its unique and magnificent architecture, this temple is among the most beautiful places in the city. Decorated in exquisite red sandstones, thousands of devotees descend to Bharatpur every year to seek blessings from Goddess Ganga.

Built by Maharaja Balwant Singh, the former ruler of Bharatpur, this two-storey temple is known for its one-of-a-kind structural design, which is a perfect combination of different architectural styles. Legend has it that Maharaja Balwant Singh, who had no children, pleaded the Goddess for a child for several years and even pledged to build a temple upon being blessed with a son.

The Goddess then granted his wish and thus the construction of this temple started in 1845. It took almost 91 years to complete the temple and upon completion, Brijendra Singh, who was the 5th descendent of Maharaja Balwant Singh, placed the idol of Goddess Ganga in the temple.

Besides being home to the striking idol of Ganga Maharaj, which is made out of pure white marble, the temple is also home to a statue of crocodile that is believed to be the divine carrier of the Goddess. The temple also houses a four feet high statue of Maharaja Bhagiratha. The gong situated inside the temple is said to have such a powerful reverberation that it could be heard even from a great distance. The temple is a symbol to represent the holiness and purity of Goddess Ganga. 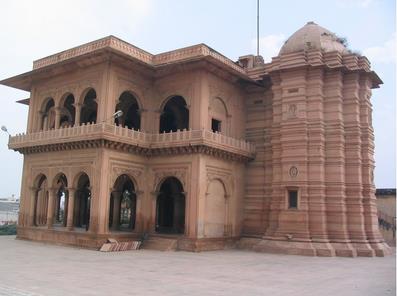 After the prayers are complete, the devotees are offered Prasad in the form of holy water from River Ganga, which is especially brought over from Haridwar each year. The water is placed under the feet of the Goddess in a huge silver pot, which is done so that the water receives blessings of Goddess Ganga and through that, to the devotees. 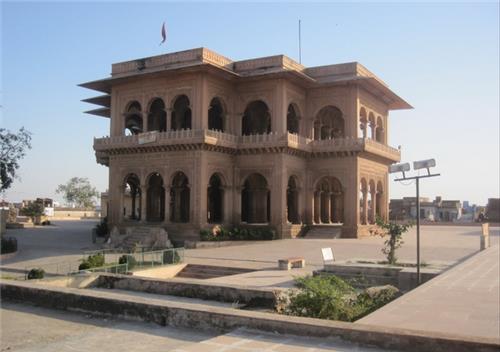 All the walls and pillars of the temple are adorned with exquisite paintings and carvings. The main entrance gate of the temple consists of a beautiful sculpture of Lord Krishna holding the gigantic mountain of Giri Raj on one side of the gate and beautiful statues of Laxmi Narayanji and Shiva Parvati on the other side of the gate. Legend has it that while the temple was being constructed, all the wealthy residents of Bharatpur were required to donate one months’ salary towards the building of the temple.

How to Reach Ganga Temple

The best time to visit the temple is during the festivals of Ganga Dussehra and Gangashaptami, which is when the entire temple is beautifully decorated with Diya’s and crowded with thousands of devotees from all over the country.

Since Ganga Temple is located at a very convenient location in Bharatpur, one can easily reach the temple by either hiring a taxi, auto-rickshaw or a cycle-rickshaw from any part of the city.

Situated in the heart of Bharatpur in the state of Rajasthan, Laxman Temple is one of the most famous temples in the city. Known for its magnificent architecture, it is a major tourist attraction in Bharatpur. 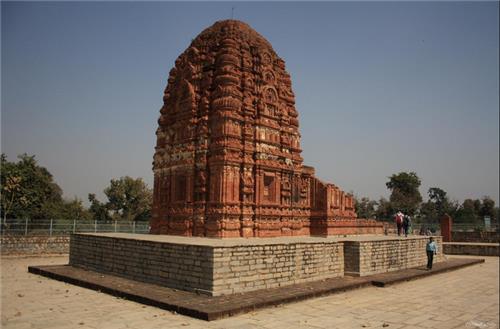 Due to its rich history, Laxman Temple is visited by thousands of devotees every year, who descend to Bharatpur to pay homage to Lord Laxman. It is one of the oldest temples in the state of Rajasthan. Situated in the main market area of Bharatpur, this temple is believed to be around 400 years old. According to the legend, Laxman Temple was established by an honorable sage – Naaga Baba, who devoted his life for the upliftment of the mankind. Currently, the temple is managed by the descendants of Naaga Baba, who sing devotional songs for the deity every day. This aarti is attended by thousands of followers from all over the country.

Situated right next to Laxman Temple is another very popular temple (also known as Laxman Temple), which was established by the founder of Bharatpur - Maharaja Baldev Singh. It is said that this temple is as old as the city of Bharatpur. According to a popular belief, it is believed that the Maharaja constructed this temple so that he could pray to the Lord daily for his victory over all the battles he ever fought.

How to Reach Laxman Temple

Due to its convenient location, one can easily reach the temple by either hiring a taxi, auto-rickshaw or a cycle-rickshaw from any part of the city of Bharatpur.

Set in the center of the city of Bharatpur, Banke Bihari Temple is another very popular temple situated over here. The temple is devoted to Lord Krishna, who is also known as Banke Bihari by his many followers.

Spread over a huge area of land, the temple of Banke Bihari in Bharatpur is constructed in a very similar manner to the popular Banke Bihari Temple in Vrindavan. 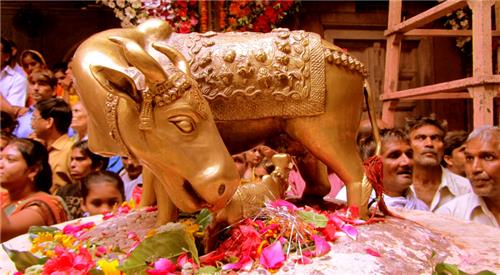 The main hall of the temple houses the captivating and beautiful idols of Lord Krishna and his companion Radha. Both the idols are exquisitely dressed and adorned with eye-catching jewellary and clothes from head to toe. While the walls and ceilings of the temple are decorated with wonderful paintings of several deities, the exteriors of the temple in Bharatpur, especially the verandah, are covered in various framed photographs showcasing Lord Krishna’s childhood. The main attraction of the temple is the morning and evening aarti that takes place over here everyday. It is attended by hundreds of devotees, who descend to Bharatpur to seek the blessings of Lord Krishna.

With a magnificent Brij-inspired architecture and structure, the Banke Bihari Temple in Bharatpur is a popular tourist attraction among visitors from all over the world. Furthermore, the tourists from other countries, who visit the temple, get a fair idea about the religious significance of the temple in India.

How to Reach Banke Bihari Temple

Since the temple is located at a very convenient location, travelers can easily reach the temple by either hiring a taxi, auto-rickshaw, cycle-rickshaw or a tonga from anywhere in Bharatpur.